Saying Hello to an old Friend 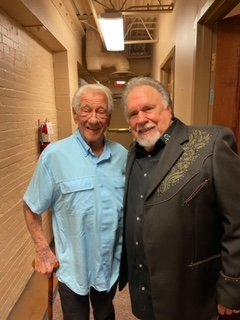 In McMinnville, TN on April 23rd, I was happy to see an old friend backstage. It was the longtime bus driver for Conway Twitty and Loretta Lynn, Mr. Billy Parks.  Billy and I traveled a lot of miles together back when I first started my career as the opening act for Conway & Loretta. I know I’ve told this story before but when I was first starting out, before I had my own bus or my own band, I was driving my own car to open for Conway and Loretta’s shows. I followed them on the road and so it might be a 12-hour drive from one show to the next, catch a few hours of sleep before it was time for soundcheck, then it was showtime. I was completely worn out. Kind-hearted Loretta took notice and insisted that I stop driving my car and ride her bus.  Billy Parks made me feel very welcome on the bus and I always appreciated that.